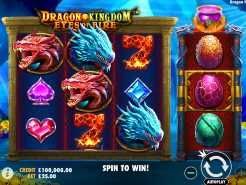 Play Now
Any Pragmatic Play slot release is a headlining event. That’s certainly true of the Dragon Kingdom: Eyes of Fire slot game. The screen that loads for you is an unusual one – certainly not what we expected, yet in a positive way. Let’s explain what lies in store for you if you decide to load and play this new slot.

It is about as far from the usual three-reel slot as you could get, though. Expect lots of detailed dragon heads appearing over those reels, along with flaming sevens and some playing card symbols. They’ve even designed those to look like rich gems though.

What’s that other reel on the right?

Another reel? Yep – you can see it next to the third reel, standing apart from it. There is a bubbling pot with flames underneath it, sitting on top of this reel. We spotted several dragon eggs in the three spots on the reel too.

Keep an eye out for the eye

The dragon eye, that is, as this is your wild symbol. It can land anywhere and always replaces everything else. This means it can help you score prizes that you would otherwise have missed.

Look for the progressive feature

Dragon Kingdom: Eye of Fire includes a level-up feature. You begin on level one. If you collect four losing spins, you’ll progress to level two. This sees another reel pop up with win multipliers on it. If a prize drops during a spin with this reel in place, you get the multiplier associated with that prize. There are six levels in total, with multipliers ranging from 2x up to 50x. Collecting the non-winning spins occurs throughout the game, so the longer you play, the more chance you have of attaining new and higher levels. Once you hit the sixth level, you stay there until you get a prize on a spin. The multiplier is awarded, and you then return to the first level once again.

Get ready to face the dragons today

For a three-reel slot with five lines available to play on, the Dragon Kingdom: Eye of Fire game has a bold presentation and lots to offer. It’s better to play for a longer session if you can, but always pay attention to your budget. Remember too that this is a low to medium volatility game, so make sure you’re happy with that before you begin.
Play Now